Since the beginning, Big Red Stores has been sponsoring The Salt Bowl of Saline County. We’ve helped with planning, advertising and worked with the Athletic Departments of both Benton and Bryant Schools to make it a bigger deal each year. But this year, we tried something new. We became drop-off locations for the Arkansas Food Bank Salt Bowl Peanut Butter Drive. With nine participating locations in Saline County, and over 40,000 customers per day, Saline County residents came together to help Big Red Stores raise over 9,200 jars/pounds of peanut butter. Not only does this peanut butter go back to people in The State of Arkansas, but it comes right back to Saline County.

Benton and Bryant Public Schools, Everett Buick GMC and many other places became drop-off locations for this year’s Salt Bowl Peanut Butter Drive. And with the help of everyone, over 40,000 pounds of peanut butter were raised for children and families in need in our community. They don’t call it the heart of Arkansas for nothin’! 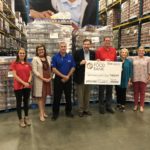 BIG RED IN THE NEWS